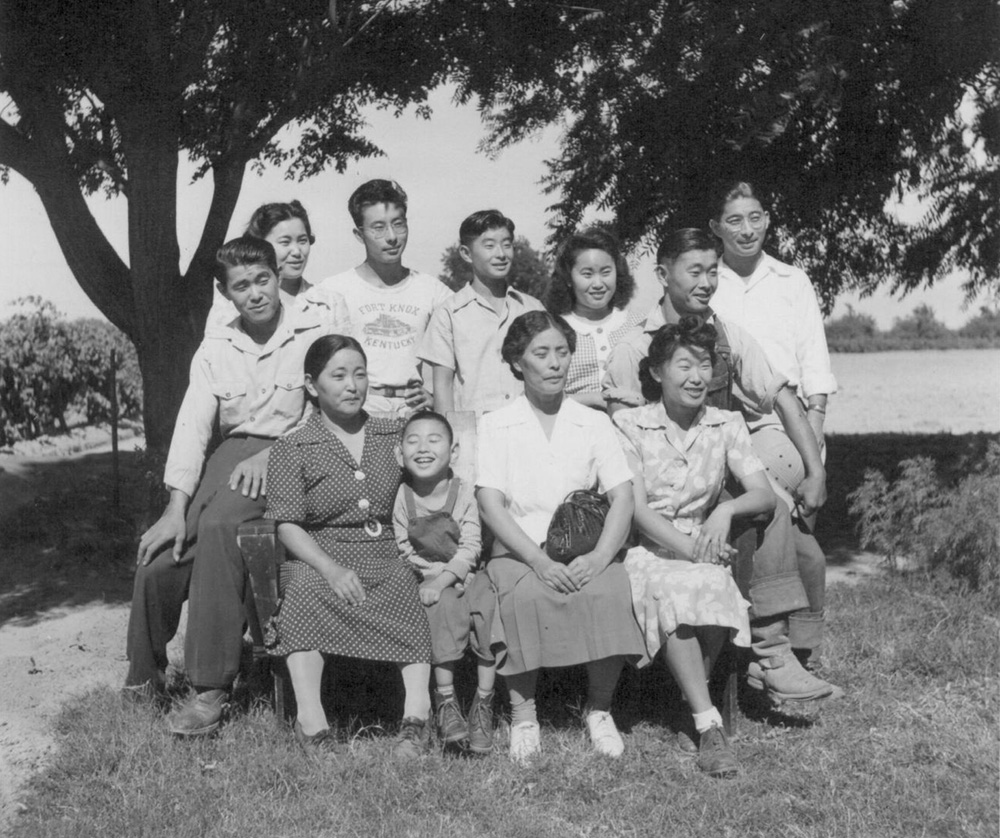 Saburo Masada's father, Ihei Masada, immigrated to the United States in 1906 from Kagawa-ken, Japan on the island of Shikoku, and settled in Fresno County, California.  Saburo's mother, Nobuye, came to the U.S. in 1918 as a picture bride from Toyohama, Kagawa-ken.  One of the main obstacles they faced were the Alien Land Laws that prevented Japanese immigrants from owning land.  They made their living farming, and had to lease both their house and vineyard.  Their seven children, Miyoko, Toshihiro, Yuri Lily, Katsumi, Aiko Alice, Saburo, and Tokio Timothy, were all born in Fresno.

The Masadas were given two weeks to prepare following the signing of Executive Order 9066. Saburo recalls what happened: “On May 16, 1942 an Army truck drove into [the] front yard of our farm, and all nine of us were taken to the Fresno Fairgrounds, which was converted into a temporary prison camp.”  Though officially called the “Fresno Assembly Center,” it was a Detention Center.  “After six months at the Fresno Detention Center,” he begins, “on October 24, 1942, we were shipped by train to ‘Jerome Relocation Camp,’ a euphemism used by our Government to hide the fact that it was America’s Concentration Camp, in Arkansas.”  The trauma of incarceration, the long journey by train from California to Arkansas, and facing winter weather, took its toll on his father.  There was no heat in their “flimsy, tar-papered barrack.”  In Saburo's own words:

“My father caught pneumonia and three weeks after arrival he died in a make-shift barrack hospital.  The day he died, the pot-bellied wood stove arrived in our barrack.  Too late.  When my father was taken to the hospital, my family could not locate me because I was playing Monopoly in my friend's barrack.  When they located me, I was rushed to the barrack hospital in an ambulance and I was told to dab my father's dry lips with moistened Q-tip to help quench his thirst just before he died.  My mother was only 43 years old with seven children to raise in a concentration camp with an unknown future.  With our relatives scattered in other blocks and other camps, we did not have a normal opportunity to grieve with relatives and friends around us.  Besides, we could not host any visitors in our barrack, which was wall-to-wall Army beds.   I regret that the day after my father's death, I just went out to play with my friends who didn't even know I had lost my father.”

The adults tried to shield their children from any discussions about the plight of their situation.  “Children … were kept busy with normal activities as much as possible—school, sports, entertainment, dances, crafts, etc.”  They remained in Jerome until June 30, 1944, when the camp was needed for a secure prison for German Prisoners of War, and those in the Jerome Camp were transferred to various other camps.  The Masadas were sent to the camp in Rohwer, 20 miles away.

In 1945 when the Masadas were released, they were grateful to have a farm and home to return to, thanks to their friends, the Sorensen brothers--Ray, Floyd, and Orville--and Ted and Nellie Nielsen, who had kept it for them.  Due to the shortage of labor during the war, the farm was somewhat run down.  Everyone pulled together to survive, farming, growing grapes for raisins and picking cotton.  They also had to work for other farmers to supplement their income.   When Saburo was reunited with his classmates in high school, the close bond with his classmates was gone.  Throughout the three plus years of high school, none of his friends inquired anything about the three long years of separation.  This was disillusioning to Saburo because the tight bond of friendship was gone.   His  sister Aiko was a senior when they resumed classes.  When she excitedly went with her classmates to the Principal’s Office for their Cap & Gown measurement, Principal Butzbach took her aside and told her, “We decided we don’t want any Japs at our Graduation, so you can’t attend!”  She felt like she was slapped in her face.  She was so stunned that she wasn’t able to tell her family what had happened.  She dropped out of school but was hired the same day for a job in Watsonville.  Years later the family learned what had happened.