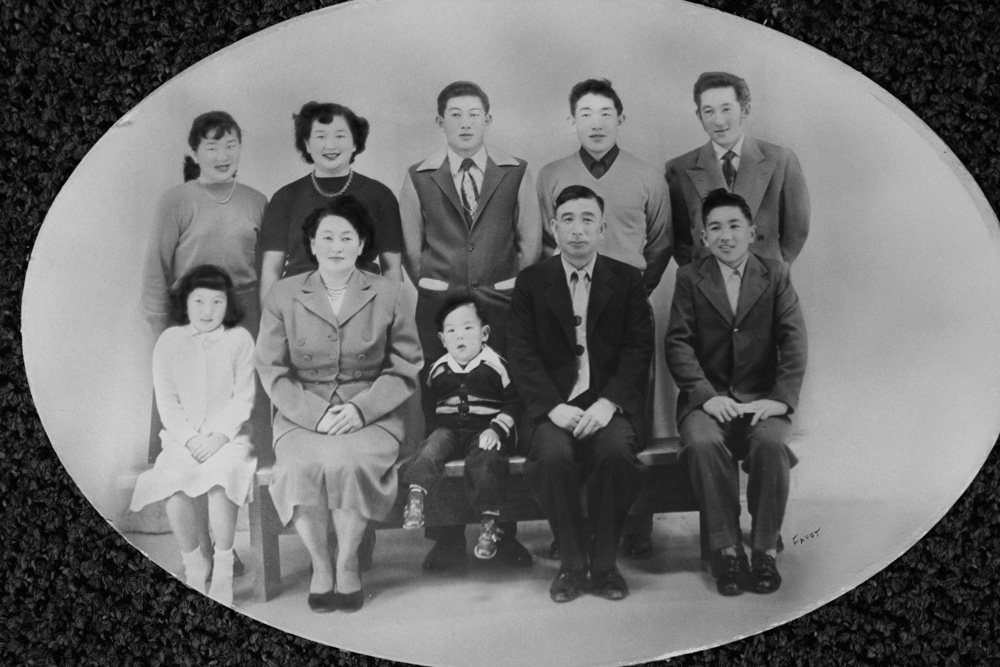 Ikuzo Nakamura came to the United States in 1923, having immigrated from Shiga-ken, Japan.  He put down roots in Salinas, California, where he had friends. His wife, Helen, was a native of Salinas. The Nakamuras were successful truck farmers who were able to help other Japanese families financially. They had eight children: Charles, James, Harry, Marion, May, Robert, Earlyn and Donald.

Upon the signing of Executive Order 9066, the Nakamuras were sent to the Salinas Assembly Center, and given #13141 as their family ID number.  “We would only be known by this number and not by our name,” recounts Marion.  After three months in the Assembly Center, they were sent to the Poston War Relocation Center, Camp II, in the desert of western Arizona. Ikuzo and Helen both worked in the kitchen for $16 per month each (roughly $235/mo in 2016 dollars).  Professionals, like doctors, were paid no more than a private in the Army to avoid criticism from the public. Ikuzo helped to cook and lift the heavy pots and pans, while Helen was a dietitian who made plates for young mothers, the sick, and the diabetic. The family never dined together while in Poston, and the siblings were never very close after being released. Her brothers eventually went to Gunnison, Utah, where they worked on their aunt's farm.  According to Marion, the concepts of Gaman and Gambaru helped them “to make the best of a bad situation and move on with our lives the best way we could.”  While incarcerated she was molested by an Issei man, the father of a friend. She tells how she was traumatized by the act and unable to discuss it for many years. “I was never able to tell my mother about it before she passed away at age 85,” she says.

Marion states that after the war “it was a very difficult time because prejudice and discrimination was still very strong against us.”  It was the family's desire to move back to Salinas, but strong anti-Japanese sentiment there forced the family to seek housing in Watsonville, California instead.  Because no one would rent to Japanese, the family lived in Watsonville's Buddhist Temple one month, and then the Japanese Westview Presbyterian Church. The family had lost everything and all of the children had to work just to survive.  In the 8th grade Marion worked after school cleaning houses for two families. One of the families was supposed to feed her dinner, but they gave her only a tiny amount of food, and “a very thin sliver of chocolate cake.” She says, “I can never forget this because I was very hungry!”

Her mother did not discuss the family's incarceration, even when asked, and she recalls hearing that her mother would only discuss it with her peers. Twelve years after her incarceration Marion married Saburo Masada. “I don't know how my parents felt, but Saburo and I worked on the Committee on Redress,” she states, adding “it did not compensate for all our years of incarceration and losing all [of] our belongings and property.”  When asked what she would want people to know about this part of American history, she declared “I want people to know that we lived to tell of America's concentration camp[s], which was kept hidden from the public by our Government.  My citizenship didn't mean anything and our Constitution was reduced to a scrap of paper. We were unjustly incarcerated based on a lie by Lieutenant General John DeWitt and the War Department.  We must live according to the Constitution, a government of, by, and for the people.”