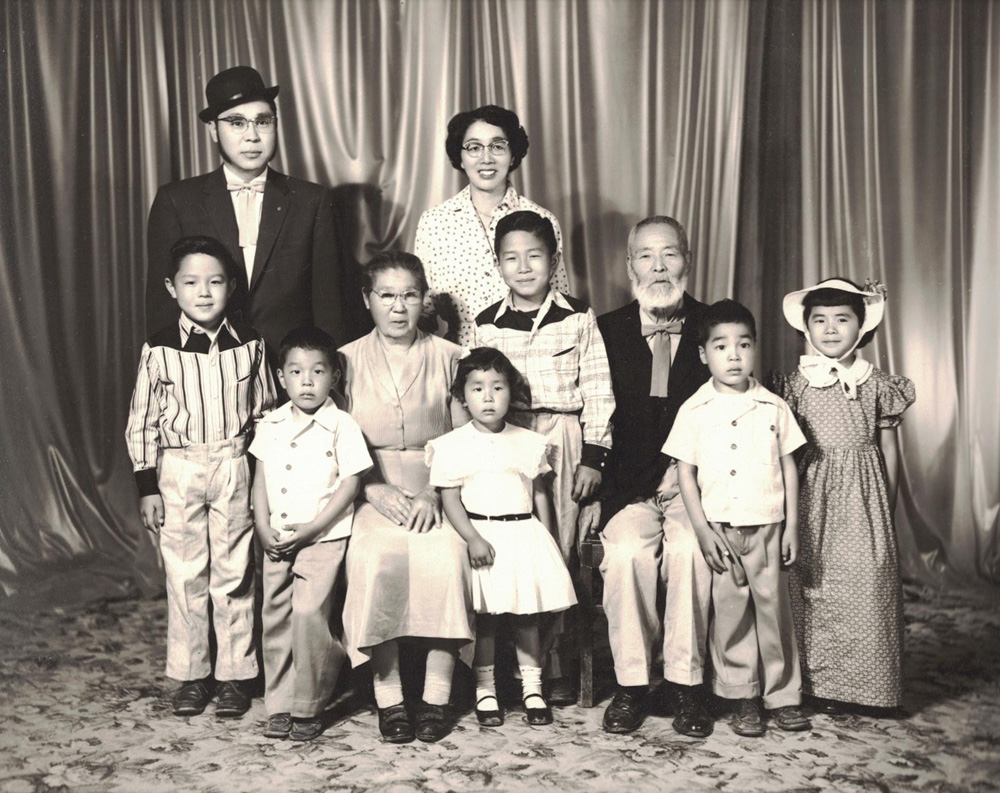 Jiro and Onobu Nishio immigrated to the United States from Hiroshima, Japan. Jiro settled first in Hawaii in the late1890s. He was later joined by Onobu and first son Joe, born in Japan in 1900. They eventually settled in Fresno in the early1900s. Jiro worked as a foreman overseeing agricultural workers. They had two more children, George and Frank, born in 1917 and 1920. George attended Fresno State and worked his way through optometry school at the University of California, Berkeley.

Rokuro Okusa moved from Hagi, Japan, to California in 1896 as a teenager and set up a bicycle shop in Fresno.  His first wife, Yoneko, died in 1908 at the age of 26. He remarried Mine Saiki, also of Hagi, Japan, who came to the U.S. after graduating from Ochanomizu University in 1906. They had six children, Setsuko, Taro (Ty), Kiyoto (Keek), Hideyo (Beck), Michiko, and George. Michiko would go on to marry George Nishio.

The Nishios were sent to the Fresno Assembly Center, and from there to Jerome, Arkansas; Joe was sent to Tule Lake. George and Frank joined the U.S. Army. Frank served as lieutenant in the Military Intelligence Service (MIS), during both WWII and the Korean War. George was a medical technical sergeant in Europe. As a Buddhist he experienced some prejudice in the largely Christian army, and was the victim of one officer obstructing his path to promotion. Luckily another officer heard of his treatment and arranged for his promotion.

Michiko Saiki (Nishio) accompanied the Hirasuna family to Mankato, Minnesota and was spared the relocation center experience. Upon returning to Fresno, George and Michiko shared a house with Fred Hirasuna and his family. In 1950 they built a home of their own. George had a stroke in the early 1960s, and his optometry practice suffered as a result, and Frank sold his own optometry practice in southern California and moved to Fresno to help. He re-established a successful practice in Clovis and married Dr. Karen Tanaka, a professor (and later the chair) of Fresno State's nursing program. In 1995 Frank worked with the state legislature to name a section of Highway 99 north of Fresno honoring the Nisei soldiers who served in the 100th Infantry Battalion, 442nd Regiment, and M.I.S. After recovering from his stroke, George resumed active membership in the Rotary Club, the Central California Optometric Society, and the Veterans of Foreign Wars. Michiko graduated from Fresno State and was active in the community, maintaining membership in the American Association of University Women, the local artistry and hospital guilds, and also taught sewing at several 4H classes. George and Michiko had six children, and she was active in their education, and the Parent-Teacher Association at every school level.

Like many other Nisei (second-generation Japanese born in the U.S., and who are citizens by birth), George and Michiko did not express negative personal feelings such as anger or hurt when they discussed their experiences during World War Two. Their descendants believe this was a conscious decision to avoid inculcating a sense of bitterness in their children against society. They were stalwart believers in fundamental human rights for all people.

Information provided by Dan Nishio (Sansei) with special thanks to the entire Nisei generation for their exemplary sacrifice and contribution to the betterment of our nation.