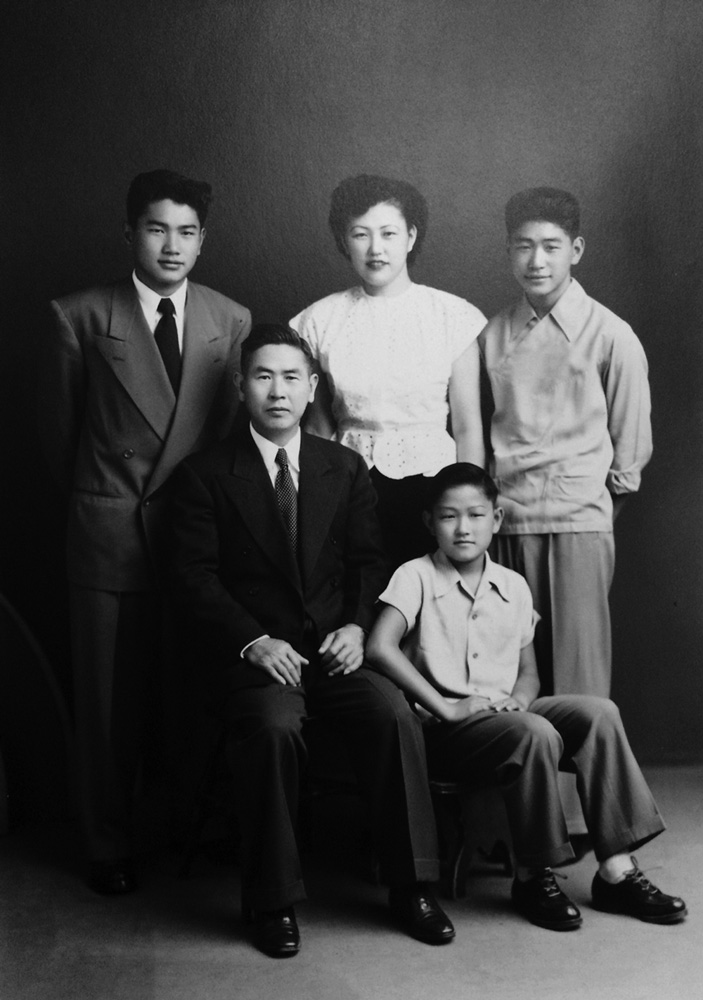 Kakutaro Ogata was 42 years old when he immigrated to the United States from Kosa, Kumamoto Prefecture in 1901, while his wife of ten years, Koto Uyeda, remained in Japan.  He lived in a boarding house in San Jose, California and worked in a laundry.  In 1916, Koto and their 15-year-old son Toshio immigrated to the U.S.  When Koto’s father died Kakutaro returned to Japan, where he contracted diphtheria and passed away.  Koto and Toshio remained in the U.S. and eventually relocated to Los Angeles.

Seijiro Horita and his wife, Fusayo Sadakane Horita, were immigrants from Hiroshima and lived in Washington state.  They had three sons and a daughter, Fumiko, were all born in the U.S., but Fusayo died after the birth of their last child.  Seijiro arranged for Fumiko to marry Toshio in 1930.  Seijiro returned to Hiroshima, remarried and had another child, and lived to be 97 years old.

Toshio and Fumiko lived and worked on a strawberry farm in Anaheim, California and had two children, Hiro (George) and Katsusake (Bob).  The family moved to Selma, California in 1936, where they bought a restaurant called K & K Chop Suey.  They had a third son, Keijiro (Dick) in 1937.  Koto lived with them until her death in 1940.

During World War II Toshio, Fumiko, and their three sons were sent to Gila River War Relocation Center following the signing of Executive Order 9066.  Their assigned family identification number was 40216, and they lived in barrack 24-7-A.  Fumiko worked in the mess hall, earning $16 per month (the equivalent of roughly $235 in 2016).  Toshio signed on to a work crew and was sent to Burley, Idaho where he picked potatoes.

In 1946 the Ogatas were released from Gila River and returned to Selma, only to discover that the belongings they had put in storage had been stolen.  They lived in a shack and picked strawberries until they could save enough to purchase another restaurant in Selma.  In 1965 they sold it and retired.  George served in the U.S. Air Force and would go on to attend Shafer School of Design in San Francisco.  Dick graduated from Fresno State and taught shop design in Concord, California.  Bob graduated from Fresno State with a degree in Graphic Design.  He then spent two years in the U.S. Army then returned to Fresno State to earn a secondary teaching credential in Art.  He taught art for 37 years at Fresno High School, Oakdale High School, Sierra High School, and the U.S. Dependents School in Munich, Germany.

Bob was invited to speak to a colleague’s high school history class about the internment.  He agreed, but had a difficult time coming to terms with his experiences, becoming physically ill with anticipation, but gave the lecture nonetheless.  As he continued to recount his experiences to other classes, it became easier for him to discuss.  Bob’s daughter, Miye, convinced him to visit Gila River in 1994.  He found the remains of a fort he dug as a boy and the place where they lived, including the pond his father had constructed.  Despite the intensity of the experience, his memories of internment led to a series of drawings which have been exhibited twice at the Fresno Art Museum and will are included in the Library’s exhibition 9066: Japanese American Voices from the Inside.

Robert was asked by the Japanese American Citizens League to make commemorative plates for the Senate Redress Committee.  These were presented at the Redress Celebration in San Diego, California in 1990.  The money he received through Redress made it possible for him to establish his painting studio in downtown Fresno.  It is unfortunate that his parents, who suffered most and lost everything during the internment, had both passed away before Redress and received nothing.