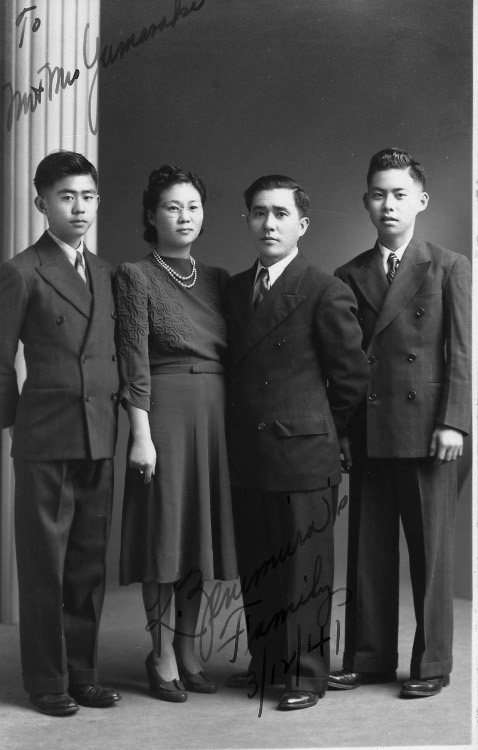 Kenichi Zenimura's parents were originally from Hiroshima, Japan, and immigrated to Hawaii.  Kenichi went to Mills High School (now Mid-Pacific) in Hawaii. After high school, he went to Fresno, where he met his wife, Lillian Kiyoko Yamasaki. Kenichi and his wife Lillian moved to Fresno in 1923, but divided their time between Hawaii and Fresno. They left their first-born child, Kenji, in Hawaii with Kenichi’s mother. Their other children, Howard and Harvey, accompanied the couple to Fresno. Kenji's grandmother eventually took him back to Japan. Kenji served in the Japanese Naval Air Force and remained in Japan after the war. Howard and Harvey grew up separated from their older brother, Kenji. Kenji worked at Mazda and later Sendai Motors. The only time the three brothers got together was when Howard and Harvey went to Japan to play baseball.

Kenichi formed the Fresno Athletic Club, a baseball team. He also worked as a car salesman selling Studebakers. Later, he started a garage and service station called Pimentel and Zenimura at E and Tulare.

When Executive Order 9066 was implemented, the Zenimuras were given three to four months to pack before being sent to the Fresno Assembly Center, and then transferred to the Gila River War Relocation Center, where they remained in Butte Camp, Block 28, Barrack 13C for three years. With the help of his sons Howard, Harvey, and other baseball players, Kenichi built Gila River's ballpark from scrap lumber. They used cement padding for a backstop, built a sheltered stand for fans to watch the games, and even made a dugout for the players.  Kenichi ran the baseball league, and Lillian worked in the kitchen.

When the war ended the family did not discuss their imprisonment. They returned to Fresno, but there was nothing left for them, so they stayed on a ranch owned by a relative. There were still signs proclaiming “No Japs Allowed.”  Initially they picked grapes on the ranch, but Howard and Harvey both resolved to go to college. Howard began taking classes as a pre-dental student at Fresno State, but was drafted into the Armed Services, serving in the Military Intelligence Service, a unit composed of primarily Nisei trained as linguists. Upon his discharge, he re-enrolled at Fresno State where he earned a degree in Education. Baseball loomed large in the Zenimura family. Both Howard and Harvey played baseball for Fresno State and for the Hiroshima Carps, a professional baseball team in Japan.

In 1952 Howard took a job as a teacher at the Madera County School District. After four years in Madera he was hired by the Fresno Unified School District. He was a teacher for a total of 35 years. He has two sons who became chiropractors, but his daughter and grandson both carry on Howard's legacy as teachers themselves.